Who is behind VMA ? Two astronomy passioned friends, each one in a special domain (The Moon for the first and astronomy computing and programming for the second) whose reunion has permitted the VMA realization.

This one is also provided to worlwide observers because of the help of numerous free translators that must be also thanked for their personal job. 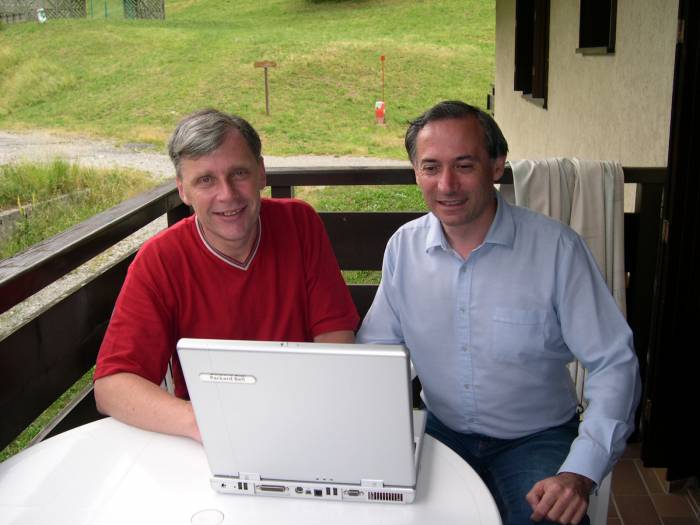 Conceiver of the “Virtual Moon Atlas”, Christian Legrand is a passionated Moon observer, who has been impressed by Moon exploration.

In 1995, he had yet realized and edited a database about lunar formations with a managing software called “ DB-LUNE ” and illustrated with pictures of Etienne Lecoq.

In 2000, He wrote with Jean Lacroux "Discover the Moon", a beginner's guide soon published by Cambridge University Press, and now also published in german and spanish. This guide presents, as VMA, the lunar formations with their exact orientation in various instruments.

On 2006 January, he started the Blog "Images lunaires" that periodically presents the french translation of the site “Lunar Picture of the day” (LPOD) by Charles Wood.

Since 2007 March, he is also editor in the french magazine "Espace Magazine" and is in charge of the page “Lunar Tourism” that presents interesting lunar sites for observing.

About “Virtual Moon Atlas”, Christian Legrand is in charge of :
- General conception and evolution of the atlas
- Informations search and typing for database
- Maps and overlays search and pre processing for Patrick inclusion in VMA
- Pictures search and processing for inclusion in libraries
- Authorizations requests of specialized scientific organisms
- Documentation and Web pages writing
- Mails answer when they are about databases and pictures library

Professionally, Christian Legrand is engineer in the french Ministry in charge of environment.

Born in 1953, he is married and father of two children.
He lives in France in Normandy.

In fact, he begun to program this kind of software in 1984.

Without his knowledges in programing and his Web practice, “Virtual Moon Atlas” will not be born.

About “Virtual Moon Atlas”, Patrick Chevalley has in charge :

- Translations managing and contacts with translators

- Mails answer when they are about software and translations

Born in 1958, he is married and father of two children.

He lives in Switzerland in Geneva canton.