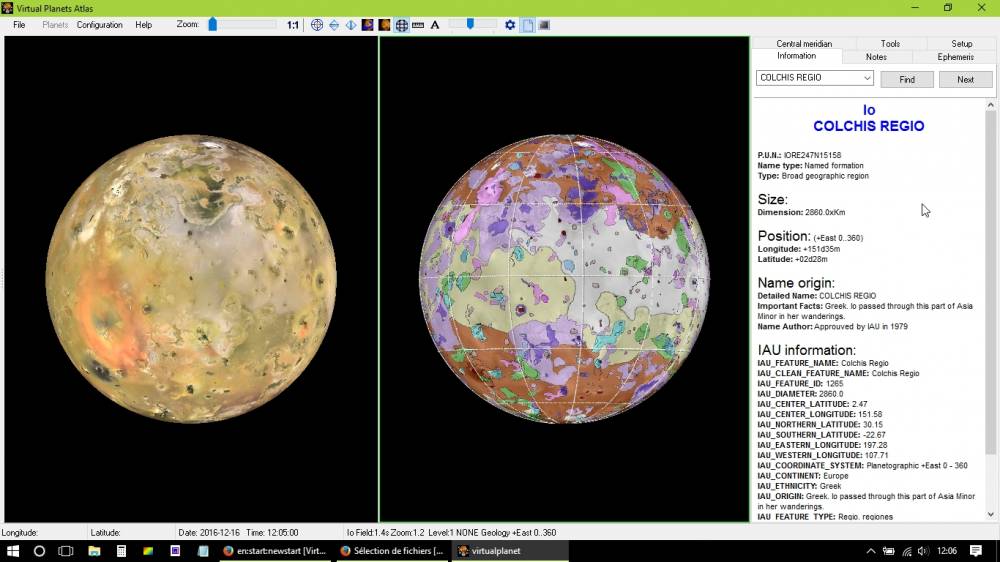 December 2016 : Version 2.0
On 2014, we have presented the «Virtual Planets Atlas » (VPA) Version 1.0, the most complete planetary atlas for computers More and more topographic and scientific datas become available for telluric planets and Solar System satellites, datas brought back by an increasing fleet of performing probes sent by the various space agencies (USA mainly, Europe and others).
We are pleased to announce you today that we put online the official Pro 2.0 version of VPA.
For this second version, JUPITER PLANET AND ITS FOUR GALILEAN SATELLITES have been added to the three planets yet integrated in version 1.0 ( Mercury, Venus & Mars ) since present technics of planetary imaging allow amateur astrophotographers to obtain details on surfaces of galilean satellites (Io, Ganymede…).

THE SOFTWARE
We have improved the VPA interface. This guarantees that Version 1.0 users will not be disturbed when discovering this new software (See screen capture picture above). A labels density cursor has been added and we have improved the “Configuration” menu since we have added a thumbnail to configure Jupiter Great Red Spot position. The zoom function has also be improved so that it's possible to display simultaneously Jupiter and its satellites according to the ephemerisis. 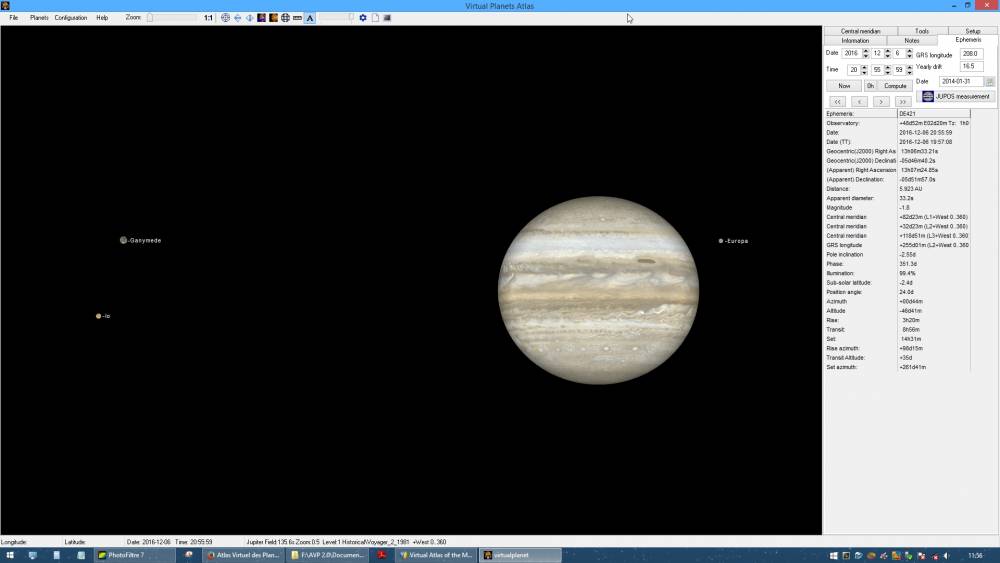 THE TEXTURES
As for Version 1.0, we have searched for the best digitized planetary global maps which were in the public domain. We mainly used datas and pictures from NASA and ESA.
But we have also obtained the authorization to use textures realized by Bjorn Jonsson and Damian Peach (A great thank to them !) Please note, that we plan to introduce Saturn and its satellites in a future version.

For Jupiter, we use as basic texture, the one from Hubble Space Telescope in 2016. 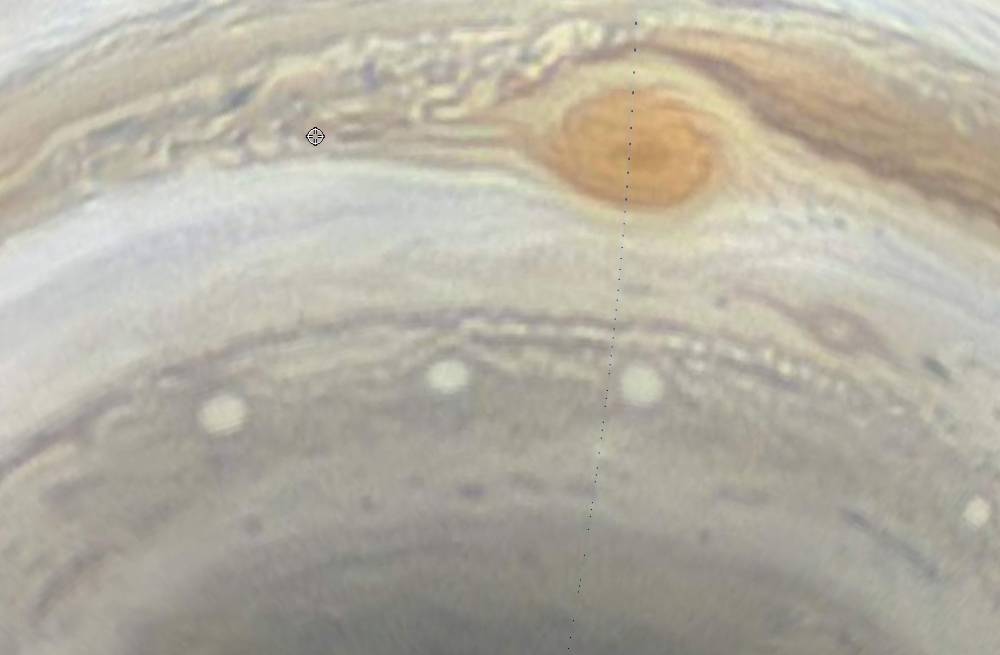 For the galilean satellites, we use the one from Galileo and Voyager US probes. 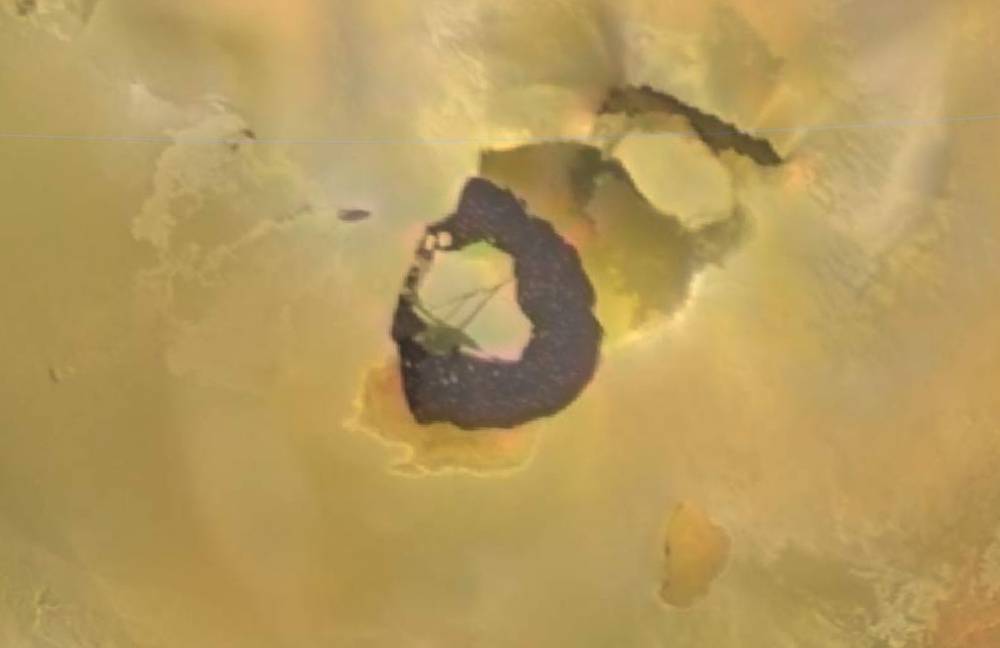 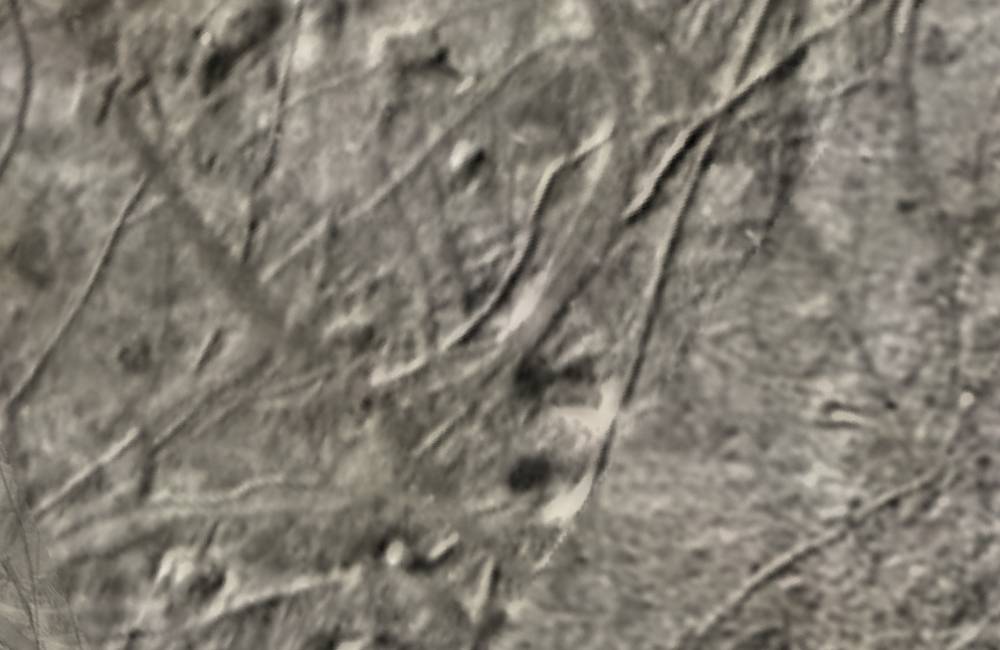 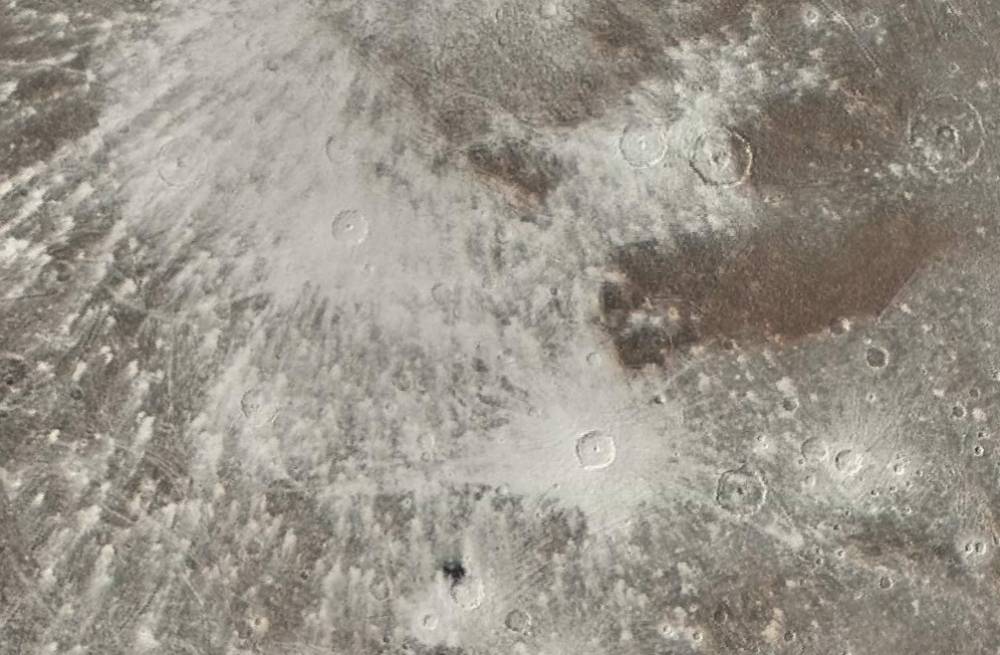 For Mercury, we use as basic texture, the one from Messenger US probe. 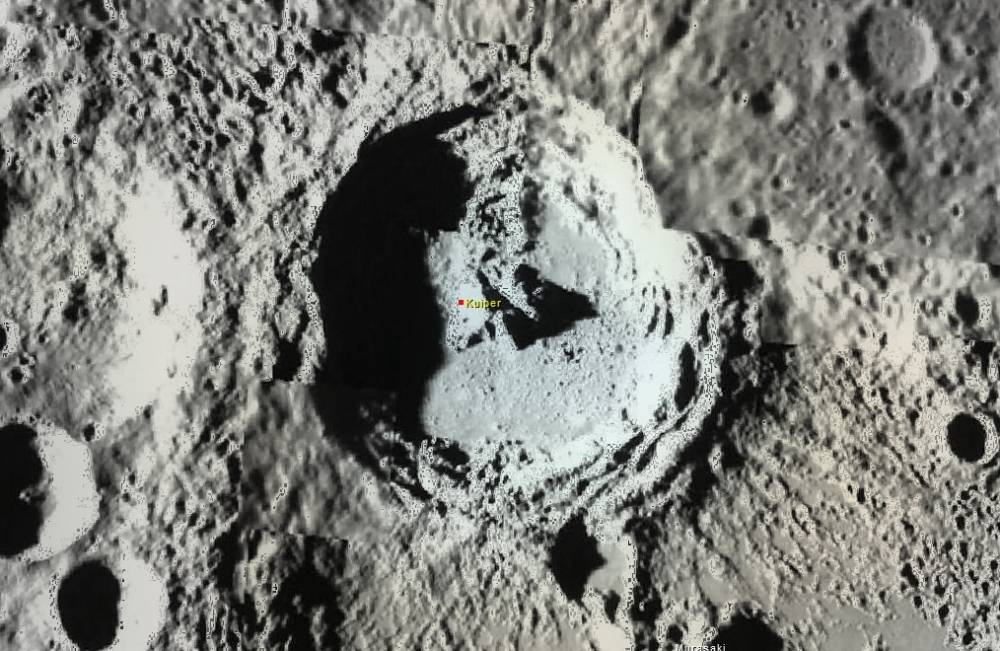 For Venus, the one from Magellan US probe 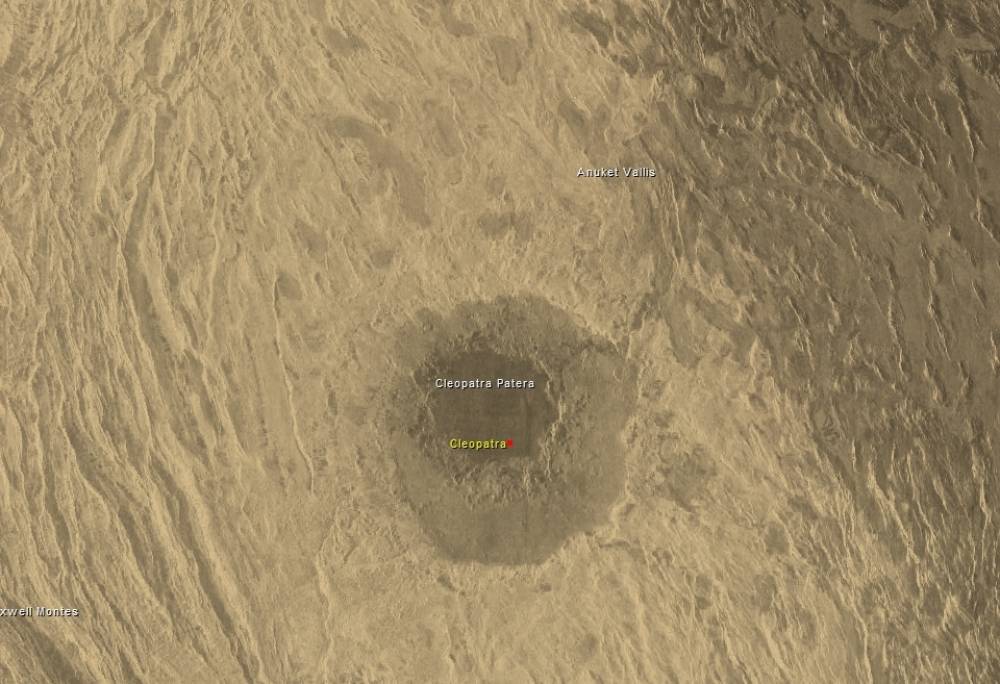 And for Mars, the one from Viking US probe. 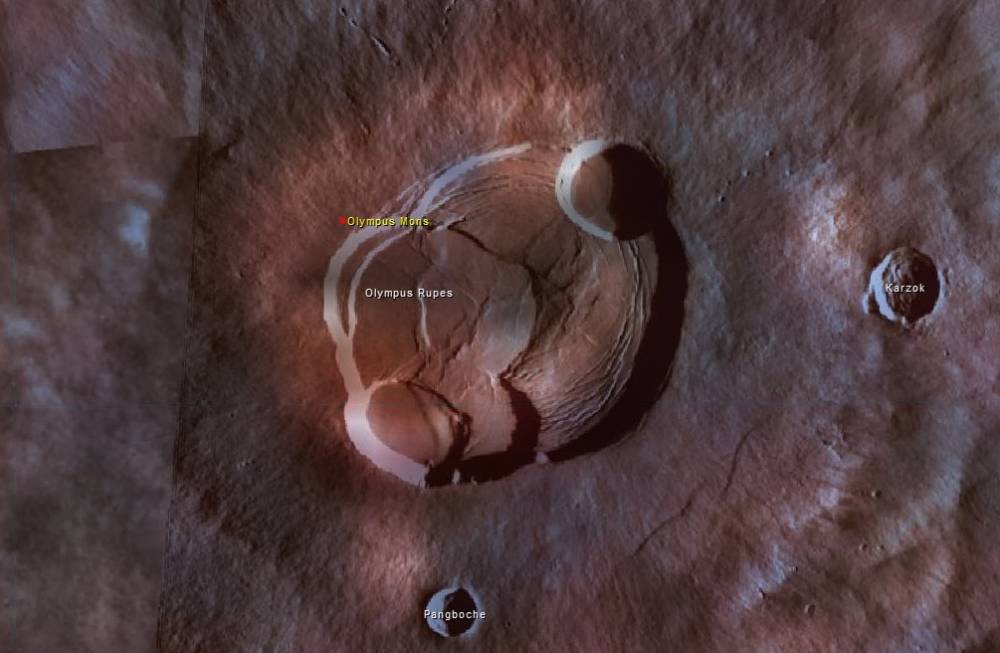 We continue to search for new textures and adapt them for integrating them in VPA next versions.

HISTORICAL TEXTURES
We were able to recover Jupiter clouds maps taken by all the probes which crossed its orbit (Pioneer, Voyager, Cassini, New Horizons) and Damian Peach authorized us to use his annual clouds maps made from his marvellous images. This allows to follow zones and belts evolution on several years. We have also recovered maps presenting Comet Shoemaker - Levy impacts evolution on 1994, an exceptional event. As for VMA, we have recovered best digitized versions of old planetary maps of the public domain. They have been adapted to VPA, so that its possible to compare these pioneers works with present datas.

You will find, as an example,
Mercury albedo maps and Mars maps presenting the famous channels on it. 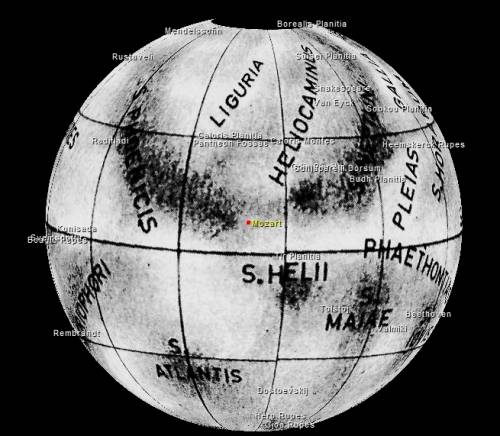 And for Mars, a texture showing the famous channels that Percival Lowell thought to have seen in his Flagstaff refractor. 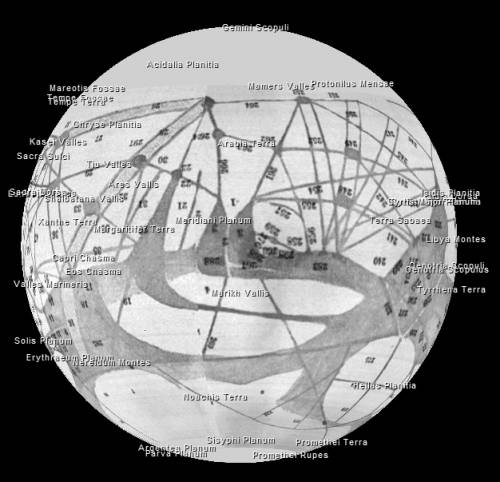 THE SCIENTIFIC OVERLAYS
We have found more than forty scientific overlays that can be draped over the textures, as in VMA. They are extracted from datas sent back to Earth by the following probes :
- Messenger for Mercury
- Magellan, Pioneer Venus and Venus Express for Venus
- Mars Reconnaissance Orbiter, Mars Global Surveyor, Viking & Mars Express for Mars
- Io et Ganymède »» , Voyager & Galileo

We have others overlays to develop that will be integrated in future versions of VPA.

THE DATABASES
For this second version of VPA, we have integrated the last nomenclatures of the International Astronomical Union (IAU) for Mercury, Venus, Mars, Io, Europa, Ganymede & Callisto and we adapted them for the VPA databases. For Jupiter, we created a special database that includes all the informations about zones and belts. 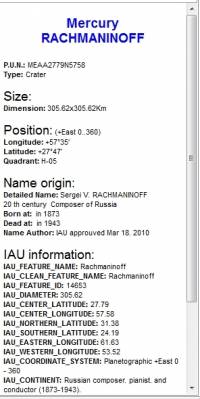 How to support our action ?

The first mean to support our action is to prefer the DVD version than the Web download.
But we had also generous offers that asked us how they could help us for the software improvement. This one is sure a free action of ourselves and we don't ask any financial help for this product which is only the reflect of our astronomical passions : Moon and planets survey for Christian Legrand and astronomical programming for Patrick Chevalley.
We were a little embarassed by these proposals, but we estimated that we can't refuse voluntary donations and finally decided to accept them. If you want to help us, go to the page "How to support our action ?" for more details. So that the benefits of your support come back to you, these funds will be affected, as far as we can do it, to the purchase of astronomical or computing equipment or books usable for the improvement of VMA and VPA or for other astronomical new products or actions.
We thank you very much in advance for the voluntary help that you would decide to bring us.

This software, realized by Patrick Chevalley and Christian Legrand can visualize the Solar System telluric planets and satellites aspect for every date and hour. It permits also to study planetary formations with unique database of more than 5000 entries compiled by Christian Legrand.

It's conceived to be easily usable “in the field” according to an observing session needs, but also to study “at home” the Solar System bodies and their surface. As the Virtual Moon Atlas, it's interfaced with "Sky charts" Patrick Chevalley's freeware. This set is certainly now one of the most complete astronomy software set released.

Rather than a long description, we invite you to read the complete manual or to look at the screens copies to see what are the possibilities.

This software has been conceived according to the needs of planets observers, but also as a powerful tool for people interested personally or professionally by planetography.

The authors are decided to upgrade periodically the software and the databases in the following month and years. Major planets satellites will begin to be included in the next month. And if you think that a function would be useful for all Moon observers, don't hesitate to indicate it us. It could be possible to include it.

It's possible to choose the language used by the software and database. Presently we manage directly only English and French version which are available with the basic package. From this Web site, you can download more translations here as soon as they became available.

The authors wish that others passionate amateur astronomers will propose their own translation in their language to make this software available to world wide planets observers.

This software is the result of a collaboration between Christian Legrand, a passionate lunar observer, and co-author of the guide "Discover the Moon" published in English by Cambridge University Press and also published in French, German and Spanish, with Patrick Chevalley, author of the worldwide known freeware "Cartes du Ciel / Sky Charts".

The authors make him free for amateur astronomers, planets observers and students who wish to practice planetography. They hope to promote planets observation and knowledge because planets have become one of the next human spatial exploration step.

The “Virtual Planets Atlas” is free software; you can redistribute it and/or modify it under the terms of the GNU General Public License. This program is distributed in the hope that it will be useful, but WITHOUT ANY WARRANTY; without even the implied warranty of MERCHANTABILITY or FITNESS FOR A PARTICULAR PURPOSE. See the GNU General Public License for more details.

Textures, overlays and databases informations are copyrighted and can only be used with Virtual Planets Atlas.

Source code is available from SVN at http://sourceforge.net/projects/virtualplanets

Calculations of the ephemerides of the planets are based on the JPL Ephemeris. DE421 ephemeris is include with the program.

For all question about Virtual Planets Atlas usage please use the user forum.
To report a problem with the software please use the bug report page, then check if a similar problem is already described
If you have any questions, suggestions or remarks about the software, you can contact Patrick Chevalley.
If they are about the textures, the overlays, the databases or the functionalities, please contact Christian Legrand.

Except where otherwise noted, content on this wiki is licensed under the following license: CC Attribution-Share Alike 4.0 International