This tool is to control the aspect of the preview image. None of the setting here have any influence to the image saved as a FITS file. They are only to help you to view the most of detail on the single raw images.

It is separated in two part, an histogram of the image and the control buttons.

On the top, a cursor control the range of histogram drawing, using 90% to 100% or the active histogram range. Reducing the histogram range make the image lighter and help to see the faint nebulae in the image.

On the histogram you can move the high (green) and low (red) clipping bar with the mouse.
You can also directly edit the low and high threshold by moving the mouse cursor to the top left or right to display the edit box.

Bellow the cursor, the numeric value let you adjust the Gamma for the display. This also help to better see the faint part of the image but without saturation of the bright area. A value of 0.45 in this box allow to convert a linear image to a display image with a standard gamma of 2.2.

switch the histogram view between full range and active range.
The button

show a negative image that can help to see faint details.

On the next row, the four button are preselected zoom level for the image.
You can also get other zoom level using the mouse wheel rotation
When the zoomed image is bigger than the screen you can move it with the left mouse button.

On the bottom row you can mirror the image

bull eye button show the mark on the image. 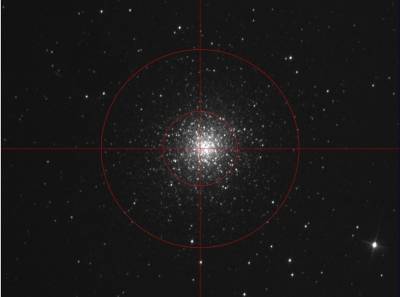 If the image is plate solved it also display an arrow with the North and East direction and print the image rotation angle.
A focus star can be automatically selected in the square that circumscribe the external circle.

button let you check for saturation in the image. 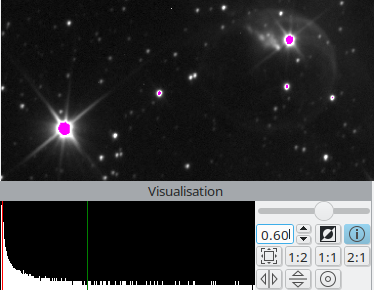 When using the option to not display the images during a capture, a new button

appear on the right, allowing to temporarily show the captured images.