Polar alignment near the pole

This tool is designed to help to refine the mount polar alignment. It require the telescope to be pointed very near the pole, if this is not possible use the method without pole visibility.

To start the procedure select the menu Tools → Polar alignment, near the pole 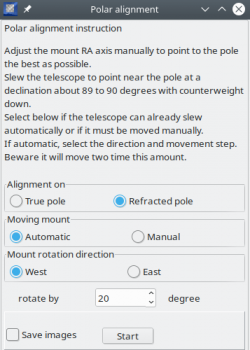 Before starting this tool the mount must be pole aligned as good as possible. The camera must be connected and if possible the mount must be initialized to allow to automatically slew at the required position.
Point the telescope near the pole, at a declination between 89° and 90°. It is important that the pole is not exactly at the image center.
The camera uses the Slew setting exposure, binning and filter. Be sure this setting give a fast enough image refresh.

In the first window, select if you want to align on the true or refracted pole. The default is the refracted pole if the observatory latitude is higher than 30°. The true pole give better result in the tropical zone.

Select if the mount can slew automatically. This generally require the handpad is initialized and a quick star alignment was done. Select Manual if you prefer to move manually or if the mount is not connected to the program.

If the mount cannot slew automatically, because it is a non-goto mount or the handpad is not initialized yet, you can select to move the mount manually. 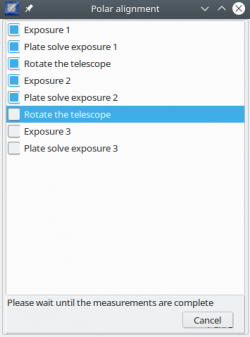 The next screen shows the progress of the measurement, take exposure, plate solve, move to next position.

If you select the automatic telescope move you have nothing to do until this step is complete.

In the case of manual move, it will stop at each “Rotate the telescope” step.

After all the steps are complete it change to the final screen. Do not close this window until you complete the mount adjustment. 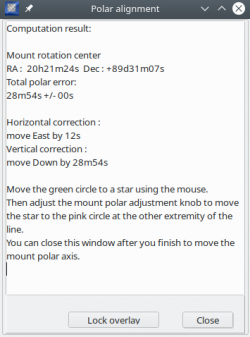 This show the result of the computation with the current mount axis direction and the total polar alignment error. Be careful at the value after the +/- sign, if it is not zero this indicate an inconsistency in the measurement.

Then it show the correction to do on the mount in both the horizontal and vertical axis.
The direction are to be interpreted this way:

At the same time the camera start a loop of exposure and an overlay is show on the image. 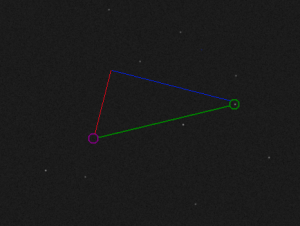 Adjust the luminosity slider so the sky background is dark enough to clearly see the guide lines.
Move the green circle at an extremity of the line to a star you can easily recognize later, for example a star that is part of a small figure, or the brightest star on the image.
You can zoom on the image with the mouse wheel to help to center the star. Press the Ctrl key if you need to move the image instead of the overlay.
When the overlay is in place, click the button Lock overlay, this way you can zoom and move the image without the risk to move the overlay.

Now the goal is to move the star to the pink circle at the other extremity of the line by using only the mount polar axis adjustment knob. To help with this movement the azimuth movement is represented by the blue line and the altitude movement by the red line.

In the case the alignment error is bigger than the camera sensor size you cannot show the pink circle on the image. In this case move the star to the point the green line exit the image field. Then redo the full procedure until the polar error is small enough to show the two circle.