With this tool you can control your motorized focuser manually. The control are adapted if you use an absolute or relative focuser. The temperature is reported if available.

With a relative focuser you can set the desired movement in steps, then click the arrow buttons < > to move the focuser in or out.

If you select Vcurve in the autofocus preferences the button V-learn is visible to start the V-curve learning.

If you not already do it, it is strongly suggested you use the focuser calibration wizard to set the correct default parameters before to use this procedure.

Introduction
In case you have an absolute position focuser and want to use the V-curve auto-focus you have to run the V-curve learning routine first.

The routine steps the focuser and measures at several positions the size (HFD value) of a star. This will result in a typical V-curve of two lines left and right of the focus point, The slope of the lines will be used later in the autofocus routine for finding the focus. in this screenshot the routine will step from position 12186+800 to position 12186-800.

The focus position shown as 12186 should be approximately the best focus position. The maximum offset 800 as shown should be selected such that the HFD value at the beginning and end is above the Start HFD focus=20 so in this example 25.

Steps to follow
If you are using filters, select the luminance filter. Start an preview loop of about one second exposure and center on and select a bright star. Run the manual focus aid and check if the peak intensity indication is about 80% of saturation level using the star_profile tool. If not adapt the exposure accordingly or select an other star. 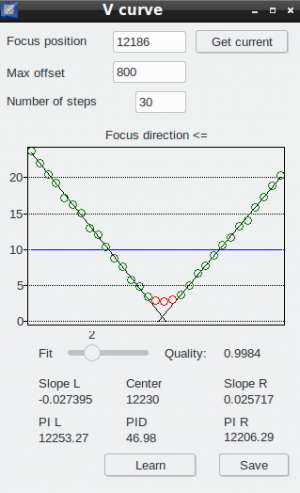 The first time you launch this tool all the settings and graphic are empty.

Indicate the most accurate focus position you can estimate, as you make a manual focus just before you can click the Get current button here.

Set the Max offset value such that moving to the best focus position plus this offset give a defocused image with an HFD around 25.

Set the number of step to 30, this is a good value that allow for precision curve. But for the first try you can save some time by setting it to 10. Just remember to repeat with 30 when you are accustomed with the procedure.

When this three numbers are set click the Learn button on the bottom.

This curve is slowly build up until the procedure is finished. Progress in is also reported in the Log and Star profile tools.

After the measurement are completed the curve should look as in the screen shot here. The graph shows the HFD value as function of the focuser position.

Check the following important points before you continue:

At the center of the V with the points marked in red.
It is important to exclude this points from the linear regression and you can use the Fit cursor to exclude more or less points.

When you adjust this cursor, look to maximize the Quality value on the right but also check the aspect of the black regression line across the green circles. The linearity must be specially good at the intersection with the blue line.

When you are satisfied by the result click the Save button. This will save the curve parameters and mean temperature for use in the auto-focus routine.

You can now try the Autofocus in the Star profile tool.