The scripts allow automation of many CCDciel function but also allow to interact with other component of the observatory. They can be executed from the script tool or part of a sequence or sequence termination.

There is also standard script that are executed on defined occasion. You can find example in the directory ccdciel/scripts/example/ :
startup is executed when the program in launched, even before any device is connected. This is the place you can automatically start other program, connect the devices, the autoguider and the planetarium. This can also be use to automatically start a sequence when the program start.
shutdown is executed when the program is closed, it can be use to close other software or power off the observatory.

The scripts can be written using the Python or Pascal programming language.
On Windows, basic Python functionality are provided with CCDciel. But you can install a full version of Python if you want more functionality like Astropy. In this case adapt the python command to use in the Preferences.
On system with an ARM processor only the Python language is available.

Both of this language are very powerful and allow for complex tasks, but this can also be as simple as sending a list of command to different devices.

Read the script example page for a quick start.

The functions specific to the interface with CCDciel are described in a separate page for Python or Pascal.

The editor allow to write and test a script from within CCDciel. 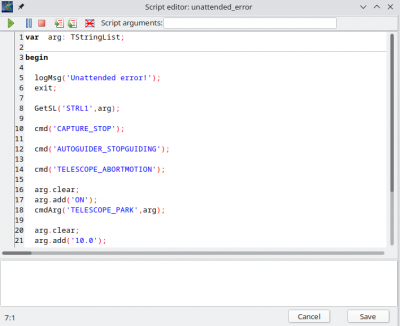 Use the Save button to record your change and return to the main window.

The top button are related to the debugging function as describe below.

With Python you can run the script with the green arrow button and see the printed output. The Stop button is also available to interrupt the execution. 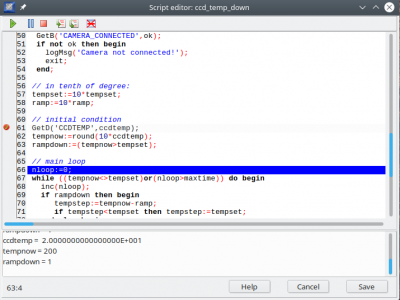 To run the script in debug mode press the green arrow Run button. The program is first compiled.

In case of compilation error, the corresponding row is highlighted in yellow, and the error message is show in the bottom message area.
If the compilation finish without error the program start to run and stop on the first code line of the main procedure. The current execution position is highlighted in blue.

You can now use the Step over button to execute your program line by line.
The Step into button do the same, except if the current line is a call to one of your function. In this case Step into allow to run the function line by line, but Step over execute the function and stop at the main program next line.

You can also set a breakpoint on a specific line to jump directly at this position.
To set a breakpoint click on the leftmost column to show a red icon.
Use the Run button to jump to the next breakpoint. The current line is then highlighted in red.

You can remove a breakpoint by clicking on the red icon or all at at time with the Remove all breakpoint button.

You can use the Pause button to pause the program execution. This can be useful to examine the condition of an infinite loop for example.